Exploring the frontiers of Science in Cape Town 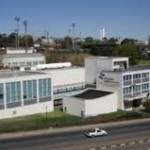 Inside, iThemba LABS looks like Willy Wonka’s factory: vibrant yellow tubes connected to gleaming stainless-steel tubes, like a digestive system. But there’s no chocolate being produced here. You can’t touch, taste or see what’s inside.

My guides into the mind-bending world of nuclear science are Kobus Lawrie and Gillian Arendse. Kobus, originally drawn to the intellectual challenge of nuclear physics, is research director of iThemba. With his mercurial blue eyes and a beard that looks well stroked, Kobus looks like a real scientist. Kobus’s wife is also a nuclear physicist who works at iThemba LABS. (I wonder if they discuss topics such as hyperdeformation and chirality over dinner …)

Before we take a tour of the facility, Kobus explains a few basics. An atom is the fundamental building block of the entire universe. An atom is just one ten-millionth of a millimetre wide. In other words, 100 million atoms placed side to side would be just one centimetre long. Approximately 40 million atoms make up just one of our cells.

I must be looking a bit stupefied as Gillian, a training and community interaction manager, steps in to aid my understanding. With his neat dreadlocks and leather wrist bracelets Gillian is less obviously a scientist. He is pioneering an outreach programme that aims to get kids engaged with science, so he has a ready supply of analogies to nudge along my understanding: if we blow up each atom in a grapefruit to the size of a blueberry we’d have to expand the grapefruit to the size of the earth. The nucleus, at the centre of each atom, is consists of protons and neutrons and is even more miniscule. If we blow up our blueberry to the size of the football stadium the nucleus would be about the size of a small marble.

As Gillian says: “Nuclear science is a good place to be if you’re comfortable with being uncomfortable. Atoms and protons can’t be directly observed – you can only detect their effects; the rest you have to deduce. You have to accept things like probability.” He then admits: “I’m not a very good nuclear physicist.”

Taking pride of place in iThemba is the Separated Sector Cyclotron (SSC). Operating since 1986, it would cost more than a billion rand to replace today. The SSC has four separate magnets with an overall diameter of 13m. Protons are injected into the SSC at an energy of 8 MeV (eV stands for “electron volt”, the units of measurement in atomic, nuclear and particle physics). The charged protons move in a circle and pick up speed because the electric field kicks it every time it turns a circle. As the protons move faster, they move in an ever-widening circle until they reach a maximum speed of 200 MeV’s. At this speed the proton could move four times around the earth in one second.

Every move that the proton makes inside the SSC is remotely controlled by operators who sit around a semi-circle of monitoring screens, like space commanders in the Starship Enterprise. Once the proton beam is accelerated to its maximum, it is transported to one of four end-stations: the nuclear physics experimental area; the proton therapy vault; the neuron therapy vault or the radionuclide production area.

1. The nuclear physics experimental area is the theoretical foundation of iThemba LABS. Inside, senior researcher Pete Jones is busy fiddling with the cutely-named Afrodite gamma-ray array for an experiment that will start in six days’ time. Hungarian scientists are coming to try to study the Fe52 isotope. The nucleus of this isotope doesn’t behave like other nuclei. It’s unusually laid back, taking seconds – an eternity in the world of nuclear science – to decay.

Whereas the Afrodite is somewhat lumbering and old-fashioned, iThemba’s K600 magnetic spectrometer, with a R30 million price tag, is second best in the world. It studies how protons interact with atomic nuclei, observing and measuring particles colliding, like cue balls smashing into a cluster of billiard balls. Only Japan has a more advanced device.

2. Proton therapy vault
The particle therapy laboratory is where science intersects with humanity and offers the hope of healing. iThemba LABS is the only treatment facility that offers both proton and neutron therapy to cancer patients. The cancer patients who come here daily to receive proton therapy are getting the most advanced cancer treatment in the world. Between 1992 and 2010, 512 patients received proton treatment. Proton beams can treat tumours that are close to critical structures, such as brain tumours. Protons, (in contrast to X-ray photons used in conventional radiotherapy), have a limited range in matter, therefore protecting the surrounding sensitive tissue from radiation. Additionally, because of an effect known as Bragg’s peak, protons emit most of their energy in the region just before they come to rest, meaning that they concentrate their destructive effect on the tumour towards which they are directed.

4. Radiopharmaceutical production
Dr Clive Naidoo, manager of the radionuclide department, shows me his latest prize: a beam splitter. This is only the second beam splitter in the world and allows an initial beam to be split in two, creating the possibility of irradiating two target stations simultaneously. This helps iThemba LABS produce radiopharmaceuticals, essential for the medical industry. For example, Fluorine-18, used in PET scans, has a very short lifespan – 1.8 hours – and iThemba LABS supplies local hospitals with F-18. Isotopes with longer lifespans are exported to 60 international clients. These include Ga-67, used for tumour localisation, I-123 for thyroid studies and Ge-68 for the diagnosis of neuroendocrine tumours.

I feel like Karen Silkwood as I leave the proton-manufacturing unit. I must step into a device, like the security chambers used at airports, and wait for the command “1, 2, 3, clear” that lets me know I’m within safe radiation limits.

Outside, it’s a relief to be in the real world. I’m greeted by a herd of zebra grazing nonchalantly on grass alongside some springbok. My visit to iThemba LABS has stretched my mind, asking it to consider the most miniscule building blocks of matter and contemplate speeds that are four times faster than the speed of light. I feel like Gulliver, expanding and shrinking on his travels.