By dawn on March 20, 2022 in Cape Town, wildlife and animals, Writing Samples 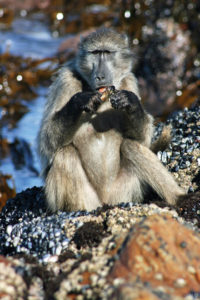 Roughly half of the troops on the peninsula occupy home ranges which include coastal land. Nevertheless, while the shoreline extends an open invitation to forage in the tidal pools for mussels, limpets and the occasional shark’s egg, baboons have foresworn their indigenous marine diet in favour of raiding from humans, whose nutrient-rich packed lunches and delicious garbage bins provide an easier food source.

Only two troops on the peninsula do not consume any human food, namely the Klein Olifantsbos troop and the Kanonkop troop. Both of these troops occupy areas of the Table Mountain National Park that allow them unlimited access to the marine intertidal zone. Of these two troops, only the Kanonkop troop is definitely pristine, meaning that they are still fearful of humans and don’t have access to human food. They inhabit a diagonal strip in Cape Point that includes hardly any tourist activity. While the baboons at Buffels Bay can be aggressive in their attempts to procure food – snatching handbags and accosting the legs of nutrient-bearing humans – the baboons at Kanonkop will largely shy away from Homo sapiens.

Sanparks diligently protects the Kanonkop troop’s wildness. One of the few people who have been allowed to observe them is Matthew Lewis, a zoologist who is studying for a thesis-based PhD titled Marine foraging in chacma baboons (Papio ursinus): effects on behavioural ecology.

The image of a troop of baboons on Matthew’s computer screen says a lot about his passion. “As a scientist I’m not supposed to get attached to my subjects,” he says, “but I couldn’t help but develop a certain affection for the Kanonkop baboons.” he adds, “Especially after first encountering the Buffels Bay troop – their raiding habits are traumatic for the tourists when they have their food stolen and themselves, when they are chased away.”

In contrast, the Kanonkop baboons, who roam freely, foraging on fynbos, offer a peep at nature uncontaminated by human contact. Baboons are omnivores that are highly adaptable to any diet. Of the 14 troops on the Cape Peninsula, seven definitely don’t eat marine food, five definitely do, and it is suspected that two others do as well. While Matthew has observed young baboons swimming, he’s never seen baboons submerge themselves to feed and believes they only swim to cool off or during play. Instead, they wait until the tide is out and forage in the tidal pools for mussels and limpets. They pull the mussels off the rocks, place them at the back of their mouth, crack them open with their molars and then use their fingers to prise them open. To eat limpets, baboons bend down, break off the top of the shell and then scoop out and eat the gonads and digestive gland. The foot, the part that glues the limpet onto the rock, is generally too tough for the baboon to eat.

Between June 2009 and June 2010, Matthew spent a total of four and a half months with the 50-strong troop of Kanonkop baboons. On alternate days two members of the research team would follow the troop from sunrise to sunset. As the team was mostly hiking off the trails, snakes were a hazard – it’s difficult to watch baboons and one’s feet at the same time, and the team had some close encounters with puff adders.

The team fastidiously recorded the baboon’s movements, noting their GPS point every 10 minutes and making a scan sample every 10 minutes to record the sex, age, class, behaviour and habitat occupied by the baboons. The digital age has reached zoology and the team used pocket PCs and software called cyber-tracking.

From close observation, Matthew learned that the feeding habit of the Kanonkop baboons varies seasonally. They work their way towards the beach every second day on average, except in summer, when the frequency of their marine dining drops to once every third day. However, while they visit the beach often, they forage only briefly. In fact, less than 5% of their time is spent in the marine intertidal zone.

What perplexes Matthew, given the high protein value of the marine food, is why the baboons eat relatively little of it. Fynbos is not great grub. It’s what Matthew calls a “low nutrition environment”, with many hard-to-digest ingredients, such as tannins. Mussels and limpets, on the other hand, have a high protein value and would seem to provide the perfect food. One of the limiting factors is that the food is often submerged and only appears at low tide. However, that doesn’t really solve the mystery – the baboons could gorge themselves at low tide. One possibility is that, due to red tides, the baboons have developed what Matthew calls “a conditioned taste aversion”, meaning that they avoid marine food since it has made them sick in the past. However, Matthew suspects that high salt- or iodine content might be what drives the baboons to fynbos.

Baboons are supreme masters at reading body language. Walking straight towards a baboon is seen as an act of aggression. As is staring. Or camera pointing.

Do not approach closer than 20m.