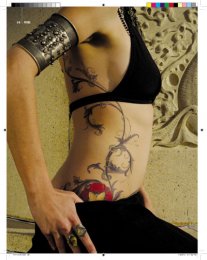 Close your eyes and you could be at the dentist. The ink pen, the tool of the tattoo artist’s trade, makes a surprisingly loud and intimidating drone as it is switched on for the first time. It is used to make a 1.5mm deep puncture in the skin, into which tiny amounts of indelible ink are deposited. Master tattoo artist Manuela is numb to its pneumatic noise. Having heard it for innumerable hours, she finds it a comforting, familiar sound. So much so that she says, “I get uneasy if I don’t hear it.” Sonja Myberg is having a geisha, the epitome of refined Japanese femininity, tattooed on her inner arm, stretching between the wrist and elbow.

This, her eighth tattoo, is a Sailor Jerry design. Sonja is employed by the rum label named after the iconic ink artist and today’s inscription is a display of loyalty to the brand. This is her first time with Manuela. While some people remain with one tattoo artist, Sonja wears work on her body from seven different artists in Cape Town. She says, “I’m collecting art.” How long did it take her to decide on the design, I wonder? “One second,” she replies. Seeing my shock that someone could so arbitrarily incise a major percentage of her epidermis, Manuela explains there are two camps of people: “Those who are impulsive and those who obsess endlessly over their design.” Today’s tattoo is no mere star on the arm, but a major undertaking that will take more than three hours of non-stop skin puncturing.

The confined upstairs space where Manuela works offers a bird’s-eye view of Long Street, but once Manuela starts to tattoo she focuses fiercely on the 30cm of Sonja’s inner arm, and the bustling business of the street outside fades to insignificance. Although there’s a lot of easy conversation, there is an undercurrent of solemnity to the occasion, befitting the fact that, after today, Sonja’s appearance will be irrevocably (bar complicated and expensive skin grafting) changed. We are separated from the world by skin and forever trying to blur the boundary.

Tattooing, it seems to me, dramatises the inevitable process of being scarred by a world that inexorably makes its mark on us. Which one of us wants to pass through life untouched, unscathed? We long for contact and tattooing seems like a willing participation in the pain that contact inevitably entails. Used ritualistically, tattooing marks time, skills acquired, social status. Gang, prison and tribal tattoos are a script that can be read. But in the secular world tattooing marks a moment of consciousness, an impulse of affiliation with an image. Aptly the folder of artwork of tattoo designs is called “flash” art. But in its impulsiveness lies its beauty. There’s daring in it. The same daring of the young couple at the altar who swear “I do”. This defiant (or unconscious) willingness to bet on permanence, in a world that to all rational evidence is transient, makes tattooing a gesture towards a willingness to commit that in other areas of life is praised as a sign of maturity and depth of character. Manuela interrupts my introspection to reassure Sonja that if the pain becomes too much, they can take two sessions to complete the tattoo. But Sonja replies, “I can’t do that; it’s gotta be done.”

With the tattoo outlined onto Sonya’s arm, Manuela lowers the ink pen to make its first puncture on the skin. “Well, here we go. You’re no stranger to this,” she says. Pain is definitely part of the process. Some people cry; some faint – but that’s more often from low blood sugar or anxiety than the actual pain. Manuela explains that fear is the biggest obstacle for the newcomer. “People don’t want to look like a sissy – that’s the problem. Breathing, really, is the key.” And the pain is subjective. Some describe it as an irritating prickle; others say that the discomfort afterwards, when the tattoo is scabbing and healing, is worse.

For certain sectors of society, tattoos are a symbol that you were tough enough not to mind the pain. For those with masochistic inclinations, pain is the pleasurable point. One anonymous person confessed about their tattoo: “My first and only one is on the right side of my pelvis. The artist kept hitting bone, which vibrated through my whole body… It hurt soooo good! After it was done, Ihad the best sex of my life – weak legs, shaky hands and blurred vision. I’m
planning on getting another one and I’m looking forward to the pain.”

For the first hour, Sonja is upbeat, wincing occasionally when the needle goes closer to the more sensitive areas. “It’s amazing how different it feels on each part of the body,” she remarks. Manuela’s most noticeable tattoo is the spider that adorns her neck. But she definitely doesn’t fit the profile of a hard-core tattoo artist. Bent over Sonja, working serenely, she explains, “I didn’t come into tattooing from a rebellious point. I’m not a biker. I’m drawn to the artistry, and it was my mission to show people that there are many other sides to tattooing.” That mission took her all over the world in a quest to prepare for the first Cape Town Tattoo convention in 2009. “Tattoo conventions allow the public into a secret world,” Manuela explains. “They can come and watch amazing work being done. In a convention tattooing becomes like performance art.”

Like rock art, tattooing has been around forever. Cultures throughout all ages have found the skin an irresistible canvas for their art making. Many people conjecture that tattooing originated in Egypt. In 1891, the remains of a priestess of the goddess of Hathor were found dating from 2160 BC, and were clearly tattooed. Europe’s oldest natural human mummy, Ötzi the Iceman (who lived about 5300 years ago and was found in 1991 in an alpine glacier), bore 57 tattoos.

The word “tattoo” itself is of Polynesian origin, derived from the Tahitian tatau, meaning to strike, and was introduced into the English language by Captain James Cook’s three voyages to the South Pacific Between 1766 and 1779. When Cook returned home to Europe he brought back with him a tattooed Raiatean man, Omai, whom he presented to King George IV and the English court. Sir Joseph Banks, Cook’s Science Officer and Expedition Botanist, a highly regarded member of the English aristocracy, returned to England sporting a tattoo.

Many of Cook’s seamen and sailors came back with tattoos, establishing the tradition of tattooing among sailors who re-introduced the practice in Europe and spread it rapidly to seaports around the globe. Possibly due to his fascination with Omai’s tattoos, King George V had himself inked with the Cross of Jerusalem when he travelled to the Middle East in 1892. During a visit to Japan he also received a dragon on his forearm from the needles of Hori Chiyo, an acclaimed tattoo master. George’s sons, the Dukes of Clarence and York, were also tattooed in Japan while serving in the British Admiralty, solidifying what would become a family tradition. Taking their sartorial lead from the English court, where Edward VII followed George V’s lead in getting tattooed, King Frederick IX of Denmark, Kaiser Wilhelm II, King Alexander of Yugoslavia and even Tsar Nicholas II of Russia all sported tattoos, many of them elaborate and ornate renditions of the royal coat of arms or the royal family crest.

Tattooing spread among the upper classes all over Europe in the nineteenth century, but particularly in Britain, where it was estimated in Harmsworth magazine in 1898 that as many as one in five members of the gentry were tattooed. Members of the upper class gathered in the drawing rooms of their country estates after dinner andpartially disrobed in order to show off
their tattoos. There are persistent rumors that Queen Victoria had a small tattoo in an undisclosed “intimate” location; Denmark’s king Frederick was filmed showing the tattoos he had made as a young sailor. Winston Churchill‘s mother, Lady Randolph Churchill, had a tattoo of a snake around her wrist, which she covered when the need arose with a specially crafted
diamond bracelet. Carrying on the family tradition, Winston Churchill had an anchor tattooed on his forearm. What kept tattooing from becoming more widespread was its slow and painstaking procedure.

Each puncture of the skin was done by hand as theink was applied. Then a technical
revolution spelled a change in fashion: in 1891, Samuel O’Reilly patented the first electric tattooing machine, based on Edison’s electric pen. The basic design with moving coils, a tube and a needle bar remains the same today. The electric tattoo machine allowed anyone to obtain
a reasonably priced and readily available tattoo. Once the ordinary person could easily get a tattoo, the upper classes shunned it. Today, it’s estimated that globally up to 25 per cent of people under 30 are inking their skin. Nowadays, when everyone from yogis and young Christians to
housewives has embraced ink, the challenge for tattoo artists like Manuela is to avoid banality and keep the art edgy. Interjecting in our involved discussion about the history of tattooing, Sonja
makes a loud groan: “I think I’m going to have a cigarette break before you do that head.”
During the five minutes she was gone, Manuela barely shifts position and talksabout the spider’s web on her neck and admits that it sets her apart from the other mothers at the exclusive private
school that her daughter attends.

She’s not often asked to bake cakes, but rather given the task of body painting the kids in the school play. As Sonja returns reluctantly to the ophthalmic chair that looks like a suitable torture device, she confides, “The first hour is like thumbs-up; the rest is downhill.” Manuela has outlined the tattoo in black and is colouring in now. “It’s like oil painting. You use the darker colours first, “she explains. Towards the end of the second hour the upbeat mood begins to darken.Sonja becomes noticeably tense, wriggling in the chair and tapping her foot with irritation. She calls for another cigarette break. Manuela wraps her arm in cling film. “You can always come back,” she suggests to Sonja, who replies, “Don’t wanna.”

The third hour is definitely tense. Manuela has hardly moved. I’m in awe of her focus and commend her patience. She tells me, “I’m an Aries and not patient in general. People who know me can’t believe what I do.” As the third hour passes, Sonja is struggling. Skunk n Nancy’s “Weak” blares through the speakers. Weak as I am, no tears for you Deep as I am, I’m no one’s fool. As Manuela works towards the sensitive area in her elbow, Sonja says, “I won’t be able to sit through that.” Manuela reassures her quietly, “You can.” As pain takes centre stage, everyone is quiet. “I can’t do it. I just feel sorry for myself,” says Sonja close to tears. “Suck it up,” says Manuela, handing her a Fizzer. It’s an old trick that soothes Sonja until her arm begins to tremble. “I’m starting to shake. Do you have a ball I can hold?” Manuela gives her a wad of crumpled tissue.

Through her discomfort, Sonja tells Manuela, “You do it much softer compared to the other tattooists – especially the way you wipe – that constant wiping drives me berserk.” After three and a half hours, Sonja can take no more. The geisha’s tiny lotus blossom feet will have to wait for
another day. As though the school bell has rung on Friday afternoon, she leaps from the seat.
“Oh that’s amazing” she says, admiring her arm. “Now all I have to do is give her a name.”