Emma Brockes, author of She Left me the Gun, Sa book tour dates 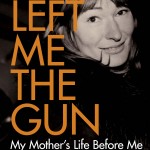 “One of those memoirs that remind you why you liked memoirs in the first place… It has the density of a very good novel… As you do with the best writers, you feel lucky to be in Ms. Brockes’s company.” –Dwight Garner, The New York Times

A chilling work of psychological suspense and forensic memoir, She Left Me the Gun is a tale of true transformation: the story of a young woman who reinvented herself so completely that her previous life seemed simply to vanish, and of a daughter who transcends her mother’s fears and reclaims an abandoned past.

“One day I will tell you the story of my life,” promises Emma Brockes’s mother, “and you will be amazed.” Brockes grew up hearing only pieces of her mother’s past—stories of a rustic childhood in South Africa, glimpses of a bohemian youth in London—and yet knew that crucial facts were still in the dark. A mystery to her friends and family, Paula was clearly a strong, self-invented woman; glamorous, no-nonsense, and frequently out of place in their quaint English village. In awe of Paula’s larger-than-life personality, Brockes never asked why her mother emigrated to England or why she never returned to South Africa; never questioned the source of her mother’s strange fears or tremendous strengths.

Looking to unearth the truth after Paula’s death, Brockes begins a dangerous journey into the land—and the life—her mother fled from years before. Brockes soon learns that Paula’s father was a drunk megalomaniac who terrorized Paula and her seven half-siblings for years. After finally mustering the courage to take her father to court, Paula is horrified to see the malevolent man vindicated of all charges. As Brockes discovers, this crushing defeat left Paula with a choice: take her own life, or promise herself never to be intimidated or unhappy again. Ultimately she chooses life and happiness by booking one-way passage to London—but not before shooting her father five times, and failing to kill him. Smuggling the fateful gun through English customs would be Paula’s first triumph in her new life.

She Left Me the Gun carries Brockes to South Africa to meet her seven aunts and uncles, weighing their stories against her mother’s silences. Brockes learns of the violent pathologies and racial propaganda in which her grandfather was inculcated, sees the mine shafts and train yards where he worked as an itinerant mechanic, and finds in buried government archives the court records proving his murder conviction years before he first married. Brockes also learns of the turncoat stepmother who may have perjured herself to save her husband, dooming Paula and her siblings to the machinations of their hated father.

Most of all, She Left Me the Gun reveals how Paula reinvented herself to lead a full, happy life. As she follows her mother’s footsteps back to South Africa, Brockes begins to find the wellsprings of her mother’s strength, the tremendous endurance which allowed Paula to hide secrets from even her closest friends and family. But as the search through cherished letters and buried documents deepens, Brockes realizes with horror that her mother’s great success as a parent was concealing her terrible past—and that unearthing these secrets threatens to undo her mother’s work.

A beguiling and unforgettable journey across generations and continents, She Left Me the Gun chronicles Brockes’s efforts to walk the knife-edge between understanding her mother’s unspeakable traumas and embracing the happiness she chose for her daughter.

Emma will be in conversation with Nancy Richards