The Dark Side of the Mother City: Interview with Roger Smith 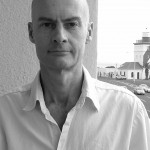 Q: You grew up in Johannesburg but set your stories in Cape Town. Why?
A: Well, Dust Devils is set mainly in KwaZulu-Natal, with a bit of Jo’burg and Cape Town, but, yes, Mixed Blood, Wake Up Dead, Capture and my latest, Sacrifices, are set in Cape Town, which is South Africa’s most schizophrenic city and remains fascinating to me.
In the late ’90s (like a lot of Jo’burgers) I moved down to Cape Town. For a couple of years I lived quite happily inside a bubble of sun and sea, then I fell in love with (and later married) a woman who grew up on the Cape Flats and my vision of Cape Town had to expand dramatically.

Q: What are the challenges or opportunities in writing about a diverse city like Cape Town? It’s almost the inverse to writing a Swedish crime novel, for example, where one bad element threatens an otherwise stable society.
A; Recently the French Slate magazine ranked Cape Town the most dangerous city in the world, ahead of Baghdad, Rio and Juarez in Mexico. In Mixed Blood, Wake Up Dead and Capture I was interested in showing the contrast between privileged Cape Town and the Cape Flats (where the rape, murder and child abuse statistics are mind-blowing) and wanted to portray the reality of many people’s lives, without sentimentalising that reality, even if it’s uncomfortable.

Q: How do you research your characters? How much is imagination and how much is the result of real encounters?
A; I do a lot of research. Wake Up Dead’s villain, Piper, evolved after a series of intense interview sessions with an ex-convict from the Cape Flats. A video I shot of him describing prison conditions and a very brutal gang murder (not for the fainthearted) can be found on my website.
Before I started writing Dust Devils I took a research trip to KwaZulu-Natal, visiting places that resembled the town in the novel, which of course is imaginary. In the ’80s, during the time of “faction fights” and the ANC Inkatha war, I spent some time working on a film in the Tugela Ferry area, which informed both Inja Mazibuko’s and Disaster Zondi’s back stories.
For the rest, it’s reading as much as possible, talking to as many people as possible. I also draw on personal experiences. As a teenager in Johannesburg, I watched white cops mow down black school kids my age during the ’76 youth uprising. A few years later I was drafted into a white army fighting a meaningless bush war against older versions of those black kids. Disaster Zondi, Mixed Blood and Dust Devil’s Zulu investigator, is one of those kids 25 years on. And Mixed Blood’s rogue cop, Rudi Barnard, is a composite of unpleasant Afrikaners I met in the military.

Q: Who are your writing role models?
A: I admire writers like James M. Cain, Jim Thompson, James Sallis, James Ellroy, Richard Stark and Daniel Woodrell. I don’t write conventional mysteries or police procedurals and don’t read them either. I’d describe my work as noir. Characters aren’t cops or outsiders called in to restore moral balance, but rather people directly connected to the crime, victims and perpetrators. Noir fiction is dystopian. Dark. And frequently without Hollywood endings. It often deals with tough social issues.

Q; Will you continue to set your novels in Cape Town, or are you tempted by other settings?
A: I published a horror novel last year called Vile Blood (written under the alias Max Wilde) that’s set in an imaginary America. Right now I’m busy planning a new book that moves between contemporary Los Angeles and Johannesburg in the 1980s.

Q: Capture is the most psychological of your thrillers. Why did you decide to move into the psychological realm? Was it satisfying and does it mark a permanent shift in your style?
A:After Dust Devils, which was my “cinemascope road movie” about contemporary South Africa, I wanted to write something more contained, claustrophobic even, and I seemed to be ready to peel away that extra layer and get deeper into the heads of my characters. In my first three books my characters were defined pretty much by their actions. In Capture their interior darkness cross-talks with their increasingly desperate and anti-social behaviour.
Over the last couple of years I’ve become fascinated by the effect of crime and corruption on the South African psyche. South Africa encourages a certain moral elasticity and the culture of savagery allows some people to forgive themselves their own criminal actions, like the three main characters in Capture who find themselves capable of increasingly toxic and violent behaviour. The book I’m finishing now, Sacrifices, is thematically similar.

Q: You are better known outside South Africa. Is this because South Africans, already affected by crime, might want to avoid reading about the harsh realities of our country?
A: The crime novels that appear to sell best in South Africa are formulaic police procedurals, which, as I’ve said, I don’t write. But, I get really enthusiastic responses from South African readers on Facebook and Twitter each day, which pleases me enormously, and my books are very well reviewed in South Africa, with a particular emphasis on how authentic they are to local readers.

Q:Are you driven by a deeper purpose than entertainment when you write crime?
A: I was invited to the Quais du Polar crime fiction festival in France two years ago and was on a panel with David Peace and a trio of French crime writers who placed themselves and their work at the centre of political and social debate, and made no bones about the fact that if a crime writer dodges socio-political issues, he’s exploiting the suffering of others for his own commercial gain. I’m in complete agreement with that, and I try to tell entertaining stories that give some insight into the complexity of post-apartheid South Africa.