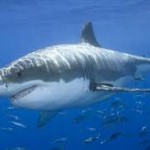 For most of us, summer spells sand, sea and sun, but for Monwabisi Sikweyiya, it spells shark!

“Every day is a headache for me,” says Monwabisi Sikweyiya, field supervisor of the shark spotters. As we speak, his attention and hands are continually drawn to the two-way radio that beeps intermittently throughout our conversation. “I never turn this off,” he says, picking up and fondling the device. “I’m always checking what’s happening. Even when I have a day off.”

Monwabisi is monitoring the 25 shark spotters strategically situated along the coastline of False Bay, which has one of the highest densities of great white sharks in the world. The spotters, who sound an alarm when a shark comes within a mile of the shore, are paid R26 per hour and work five-hour shifts, from 8am–1pm and 1–6pm.

The phrase that Monwabisi most dreads hearing is “shark attack”.

“A shark attack is fast – boom!” he says. To illustrate, he describes an attack at Fish Hoek beach.

“It had been a long, hot, slow day. Conditions were very bad for spotting. The southeaster was howling. A tourist, later identified as Lloyd Skinner, swam out of his depth. The shark came out of nowhere. It was very violent. The first bite took off the head and three-quarters of the body. He swallowed the remains with a second bite, leaving only his swimming goggles.”

His wife – and the shark spotters – watched aghast from the beach.

The shark-spotting programme was launched in 2004 after a shark bit off the leg of JP Andrews at Muizenberg beach. Business slumped along the beachfront and the shark-spotters scheme was initiated by surf-store owners in an attempt to persuade people to get back into the water. In 2006, the City of Cape Town took responsibility for the programme. In the past eight years there have been 1400 shark sightings, an average of one shark sighted every second day. “That’s hard work,” says Monwabisi. Now a few business owners complain that the spotters are overly vigilant; that they scare people with their flags and frequent alarms. But Monwabisi is adamant that avoiding shark attacks at all costs is good economics, pointing out that one particular surf store hired out only one board in the two weeks following the Fish Hoek attack.

Monwabisi has been with the spotters since its inception. Before becoming a shark spotter, he was a lifesaver and ignorant about sharks. Now, what he knows has changed him. “Previously I thought of sharks as hateful man-eaters. Now I respect and understand them. My swimming habits have changed. Now I only swim at Muizenberg, in choppy water, and never out of my depth. Sharks like calm water, at the back line. At Fish Hoek the back line is only 10m from the shore; at Muizenberg it’s 30m.”

Monwabisi Sikweyiya is a field supervisor, responsible for getting to the scene of any sightings and alerting the helicopters and NSR in the event of an attack. Although no longer on shark patrol, he remembers the thrill of his first shark sighting. “It feels good; the job is done. But later the feeling gets more intense when you realise that you might have saved a life.”

Monwabisi is certain that spotting is the most effective way to keep people safe from shark attacks. He opposes nets, believing that, like fences, they only create an illusion of safety. He points out that in Australia, 63% of shark bites occur in netted waters. Many of the sharks caught in the nets in Durban are caught on the beach side, as they swim away from swimmers. Monwabisi says that the shark-spotting programme creates an environment where both humans and sharks are safe. “If spotting conditions are right – good visibility, clear water – we can guarantee swimmers’ and surfers’ safety.”

Monwabisi admits that in the last decade there seemed to be a spike in shark attacks, which now occur at the rate of one per annum, but is hesitant to blame the increase in shark attacks on chumming and does not hold the shark cage divers responsible, as they chum comparatively little. He points out that sharks are generally more prevalent towards the shoreline from October to March when they are feeding on fish – yellowtail, tuna, white steenbras. In winter, they tend to stay at Seal Island, feasting on the fat of vulnerable seal pups.

Nevertheless, a change in their diet still doesn’t explain why sharks, who don’t particularly like human meat (JP’s leg was spat out, intact), still attack humans. “Look, I don’t know, but if forced to answer why sharks attack humans, I’d go for curiosity. The shark wants to check us out, but when they want to touch us, they don’t have hands, only teeth.” No wonder these apex creatures travel solo. Who wants to be caressed by a set of shark teeth?

However, while we cannot control shark behaviour, we can act with awareness in their presence, and Monwabisi’s biggest challenge is people’s refusal to take responsibility and listen.

Occasionally people blatantly disregard the shark spotters’ warnings. With evident frustration, Monwabisi recalls the time, only two weeks after the death at Fish Hoek, when he received a call from Liesel Lott, one of four female shark spotters. She spotted the shark a mile away and her panic increased as she counted down the feet as it neared the shore. The spotters had successfully emptied the ocean, except for one man who remained defiantly in the water. The spotter lost sight of the shark at 5m. Sharks submerge before attacking their victims from below. Monwabisi knew that he was facing disaster and was poised to call NSRI and the helicopter. But the shark lost interest, turned around and went back towards deeper water.

Later, another uncooperative surfer was not so lucky. Michael Cohen had repeatedly ignored the shark spotters’ warning. At one stage, Monwabisi was so frustrated with Michael that he considered asking him to sign an indemnity form, pointing out that if a shark ate him he’d be dead while Monwabisi would still be alive to take the blame. At around lunchtime on 28 September 2011, Michael continued to surf when the alarm went off. Despite the presence of a shark in the water, three spotters swam out to rescue Michael. Later Michael called Monwabisi to thank him for saving his life. The shark had bitten Michael on his knee, severing a major artery. Monwabisi stemmed the blood flow with his belt. He says, “A shark attack is traumatic. What’s unique about shark spotters is that we are emotionally involved. We actually get upset. If Michael had listened, he’d still being walking. People have to take responsibility. When someone is bitten, there must be someone to blame. I don’t see it as complex. If we want to co-exist with sharks, we must expect to encounter a shark whenever we put our feet into the water. When you go to Kruger, you stay in your car; otherwise, you expect to be eaten by a lion. But some people just don’t want to talk about it.”