Chilling out with hippos in Cape Town

By dawn on March 4, 2013 in Cape Town, Sports Fitness and Adventure, wildlife and animals, Writing Samples 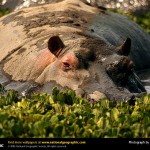 Want to get away from it all? Dawn Kennedy discovers tranquillity – and Africa’s most dangerous animal – right in the middle of the city.

Whoever penned the famous phrase about the journey being more important than the destination had clearly never tried to cross Prince George Drive during rush hour to reach Rondevlei Nature Reserve. Hands sweating, gripping the steering wheel tightly, I beep with fury, cursing the rush hour, the apex of our cultural madness.

Battling through traffic, I fix my aim on Imvubu Island. Nothing signals tranquillity more than an island. The very word sounds like a sigh and makes me think of undisturbed peace. They say that no man is an island, but it’s on an island that we can feel most at one with ourselves. Perhaps, surrounded by water, we are reminded of our embryonic existence before entering the madness of this world.

When it comes to islands, the smaller the better. Forget Mauritius or Hawaii. The one I’m headed for is roughly 100 square metres. Situated close to the demographic centre of Cape Town, next to Grassy Park, Imvubu Island is a hidden haven of peace, known mainly to locals and specimen carp anglers who come from all over South Africa to beat the record catch: a 15.3kg European carp.

Arriving at the departure point for the island, I’m met by Joy Bennet, a qualified horticulturalist who runs the island bush camp, and her brother Robin. The 24-hour security guard who will keep an eye on my car reminds me of the stress that I’m trying to escape.

Imvubu is reached by a short motorboat trip. It looks like Robinson Crusoe arrived before me. A rustic bush camp, built among the bulrushes, leads down to three jetties. At a squeeze, the dorm can house 12 people in bunk beds, but it would be pretty congested on the narrow wooden walkways.

Some of the house rules are unusual: if you find an upended turtle, turn it over, scratch its shell and watch it pop out its head. Most of all, I’m not to worry about the hippos. It was probably a mistake to read about hippos on the internet before coming here. I learned that the hippopotamus is one of the most aggressive creatures in the world and regarded as one of the most dangerous animals in Africa. The hippo’s jaw is packed with canines up to 50cm long. The hippo is responsible for more human fatalities in Africa than any other large animal. Despite their bulk, hippopotamuses can run faster than a human on land. Estimates of their running speed vary from 30–50km/h. Male hippos actively defend their territories, which run along the banks of rivers and lakes. Females have also been known to get extremely aggressive if they sense anyone coming in between their babies, who stay in the water while she feeds on the shore. However, Joy assures me that I won’t spend the night fending off hippos. “Our hippos are laid-back,” she promises.

Originally, hippos occurred naturally on the Cape Peninsula, but had all been poached by the early 1700s. In 1980 the first hippos were reintroduced to Rondevlei as the area could be fenced off. But a mere fence didn’t deter a couple of hippos who recently escaped from the park. Residents in the area were surprised to look out of their window and discover a hippo eating their lawn. Hippos on the loose? Wild! It makes baboons on the roof seem tame. Hippos are herbivores and consume over 45kg of vegetation per day. Robin quips, “When you live in Grassy Park you don’t need to mow your lawn. The hippos provide a free garden service.” He calls the hippos “big pigs” and demonstrates the snorting sound that they make.

Joy estimates that today there are seven or eight hippos living in the reserve. The male Brutus is the only one that she can identify easily. With his unmistakable armchair-size head, he is clearly in charge. When Brutus attacked a calf, its mother intervened and he killed her instead.

Joy estimates that the chances of seeing a hippo are 80–90%. These seem like good odds, although she warns that some people have been coming to the reserve and trying, unsuccessfully, to spot a hippo for years.

Joy explains that the bulrushes surrounding the perimeter of the island grow at the unruly rate of nearly 3cm a day. I wonder, why do we never see growth? Babies are suddenly toddlers, then teenagers. Maybe here I can stop time and watch the incremental growth of a reed.

Joy and Robin leave me sitting alone on the jetty, watching the sun setting behind Constantiaberg. Elephant Eye looks melancholic in the dusky light. I’m reminded of the sad Khoi tale of the princess who was kidnapped and imprisoned in Elephant Eye cave, only to cry so many tears that the resulting stream eventually filled a lake that became Princess Vlei.

As the sky darkens, a chorus of song begins to waft across the water from the direction of Lavender Hill. At first, I think it’s coming from a shebeen, but soon realise that the soulful sound must be some kind of religious ceremony. Resting on my bunk, I count ripe Manotaka berries dropping onto the roof. Suddenly, I hear a loud bellow. Hippo! I leap off my bed and rush to the jetty. Scanning the horizon with a torch, I jump up and down, yelling “over here, over here”. Joy had advised me that hippos are curious and enticed by noise. But my yells don’t tempt them. I make several more determined leaps off my bunk in response to hippo snorts before falling asleep, lulled by the sound of bulrushes rustling in the breeze.

At sunrise, the wind is calmer and the pelicans glance above the water with as much grace as they will ever muster. I hear the by-now familiar loud grunt and this time, when I look in the direction of the sound, I see a knobble in the water. Zooming in with my camera, I discover a hippo’s ears and, next to it, another set of hippo ears.

Under a hot outdoor shower I reflect on my good fortune at seeing even just the ears of a hippo.

Then, I’m ready to leave. Joy is on 24-hour standby when guests are on the island and arrives within minutes of my phone call. So far, in the 10 years that she has been running this operation, she has only had to contend with a birth and a heart attack.

Leaving the island in the boat, Joy takes a diversion. Around the corner, we bump into a sand bank crammed with birds: African spoonbill, great white pelican, African darter and Caspian tern startle and wheel into the air as we approach, providing us with an Out of Africa goodbye.

2 Responses to Chilling out with hippos in Cape Town